Mzansi Youth Choir was founded in July 2003 to provide talented and underprivileged teens and young adults (14-24) with the opportunity to perform professionally locally and internationally. The choir is made up of 45 choristers who hail from Soweto, Johannesburg and surrounding areas.

Mzansi, which means “south,” in isiZulu, is also the township slang term for South Africa. The repertoire of the choir includes elements of traditional, pop, and jazz music.

The Mzansi Youth Choir has been widely regarded as being the best show choir in South Africa. Highlights include the One World Music Festival and M-Net Idols. Starlight Classics, Starlight Classics and The Voice, The Presidential Inauguration. KKNK, The National Arts Festival. South African Music Awards. Performances with the Andrea Bocellis, Josh Grobans, and Celtic Women.

The choir performed at the International Youth Choir Festival, London’s Royal Albert Hall in April 2017. This prestigious global event was only available to the Mzansi Youth Choir, which was the only African choir to be chosen. 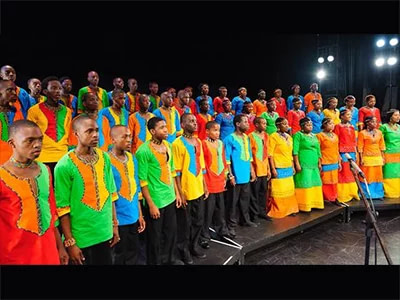 To make a booking for MZANSI YOUTH CHOIR please contact Big Talk Entertainment and we will assist you further.

mAKE A bOOKING OR AN ENQUIRY